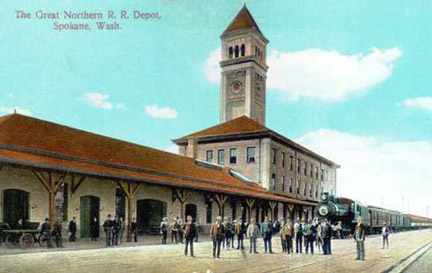 1899 CONSIST
Eight sets of equipment continued to be needed for the 64 hour schedule. Eastbound, the train left Seattle for St Paul with an RPO, Baggage/express, First Class Coach, Family Tourist, Diner, Palace Sleepers, and Buffet-Library Car. In May 1899, the Official Guide lists a Library- Observation' car on number three, the westbound Flyer, but it is not listed as returning on eastbound number four. GN did not begin painting its passenger equipment the familiar dark olive green (similar to Pullman-Green) until the late 1890's. By 1900, green was in use, however, maroon was still common to see. AFE 3491, dated Feburary 13,1900, indicates that sleepers 214, 216, 223, 224, 915-18 were still in maroon. GN began replacing stoves in its passenger equipment with steam heat in 1902. In early 1903, the oil lamps were being replaced with Acetylene lighting systems. This proved hazardous and the gas tanks were subsequently fitted with pressure relief plugs.


MOTIVE POWER
New locomotives were acquired for the Flyer, when GN took delivery of 10 heavier E-3 Ten-wheelers, received in March 1899. The locomotives, numbered 900-909 had a tractive effort of 18,150 lbs, and rode on 73" drivers. In November 1901, more speedsters were received. The 10 E-8's, numbers 1050-1059, also had 73" drivers and tractive effort was increased to 23,540 lbs. In addition, reference sheet 173 contains a picture of an E-10 exiting Haskell Tunnel in 1901 with a passenger train. As more Ten-Wheelers were acquired, few and fewer Eight-Wheelers were needed. Consolidations (2-8-0's) and Twelve-Wheelers (4-8-0's) had replaced the Mogals in helper assignments.

HEADEND
In November and December 1899, eight 65-foot RPO cars numbers 635-642 were delivered by AC&F for the new transcontinental mail contract. In March 1902, two more, 643-644, came from AC&F. The cars were a longer version of the earlier 50-foot postal cars of 1893. There were five windows between the doors and double windows between the door and end. Similar cars appear in 1920's pictures of silk
trains. Rich Miller's excellent drawings for these cars first appeared in the January 1989, issue of Mainline Modeler and are reprinted in Reference sheet 142.

The Baggage and Express cars were renumbered to the 500 series at the turn of the century. In between March and July 1902, AC&F delivered twenty 65-foot Baggage & Express cars, numbered 569-590. The wood sheathed cars had closed ends, double doors on each side, 6 wheel trucks, gas lights and lettered Great Northern with a square Great Northern Express Company herald on the sides. Reference sheet #32 contains a builder's photo of these cars.

FAMILY TOURIST
The 14 section Family Tourist Cars that had served the route since the start of service in 1893, received vestibules in 1900 and were renumbered 805-812 in 1899-1901. AFE 5313, dated December 31, 1901 was issued to equip Tourist cars 805-812 with lamps at the range end of the car. Tourist sleepers were added to the pool in September, 1902. Numbered 829-837, they were 68-feet over the vestibules, had four wheel trucks, men's and women's restrooms and, a small range and a coal heater.
DINING CAR
Eight 700 series diners having 24 seats continued to be assigned to the Flyer without any changes. The 1901 public timetable informed that

"Great Northern Dining cars are permanently attached to all transcontinental trains and do away absolutely with all the rush and hurry that too often destroys a meal on other lines. Abundance of time, the smoothest of running and the exquisite service have made the GN diner famous with the experienced traveler."

Great Northern Wins the Mail Contract
By 1899, the Great Northern Flyer, owned the fastest schedule of any train between Seattle and St. Paul. That year, Great Northern took the mail contract from the Northern Pacific on the Seattle - St Paul route, after stunning the NP with a faster running time between the cities. Part of that trip was recounted in the March, 1950 Trains Magazine by Mr. Frank Ginger, who was a railway postal clerk operating out of Spokane in 1899. He reports that until 1899, the GN was quite content to leave passengers and mail to long established rival, the Northern Pacific. In 1899, GN entered into a competition to win the Seattle-St. Paul mail contract. In November, 1899, he was assigned to the Havre-Spokane run, one of four U.S. Post Office segments on the GN's St Paul-Seattle route. The run was 516 miles long with a running time of 23 hours eastbound and 21 1/4 hours westbound.

It did not take the Northern Pacific long to respond. The railroad set a new standard for luxury travel to and from the Northwest when the North Coast Limited was inaugurated on April 29, 1900. The first electrically lit passenger train in the northwest, it featured wide vestibules, steam heated cars which were richly finished inside in mahogany and leather. At one end of the Pullman-built eight car train was the baggage car with a dynamo supplying power to the two hundred odd Madza lights throughout the train. At the other end was the magnificent 80-foot observation - featuring two card rooms, bathtub, barber shop, buffet, library, women's lounge, and an open observation platform with an electrically lighted drumhead. Its schedule for the 2056 miles from St. Paul to Seattle was 62 ´ hours. The eastbound Great Northern Flyer required an additional 2 hours. Initially intended as summer only train, in 1902 the North Coast Limited became a year round operation. It was a much better train than the GN's train where steam heat was two years away, an observation five years away, and electric lights nine years away.

In 1903 the Great Northern Flyer was renumbered as trains 1 & 2, as the new Puget Sound /Eastern Expresses were added to the St. Paul - Seattle as numbers 3 & 4. In 1903, the Flyer offered morning departures from St. Paul and Seattle, and the Expresses sailed in the evening. The Flyer continued to operate via St Cloud, Grand Forks, and Devil's lake. Numbers 3 & 4 connected with trains 153/154 at Havre for the Butte connections. On the east end, the Expresses extended transcontinental service to Breckenridge and Willmar. North of Fargo, the new trains followed the just completed line, between Casselton and Larimore via Mayville. South of Fargo, Great Northern had two routes to St Paul, via either Willmar or St Cloud. The Expresses followed the 19 mile longer Willmar line.

Great Northern now operated two first class transcontinental passenger trains over its routes to the Northwest providing service to the principal cities half a day apart. Lettering for both trains was identical and equipment was interchangeable. The Flyer kept its same basic schedule of departing St. Paul in the morning and Seattle in the evening but with a three hour faster time.
Schedule:

The Flyer was the first to follow the new route between Columbia Falls and Jennings via Whitefish-Rexford in 1904, eliminating Haskell Pass. That year the Flyer carried numbers one and four and the Puget Sound and Eastern Express numbers two and three.

1903 CONSIST
Eight sets of equipment continued to be needed for the 60 hour schedule. Advertisements announcing the train stated that the both trains had all new equipment. The regularly assigned equipment was a RPO; Baggage/express; Coaches; Family Tourist Cars; Dining Cars; Palace Sleepers; Buffet Smoking Library Car

MOTIVE POWER
In February 1904, ten additional E-8 speedsters were acquired. Like the earlier
group, numbers 1060-1069, had 73" drivers and a tractive effort of 23,540 lbs.
As more Ten-Wheelers were acquired, fewer and fewer Eight-Wheelers were needed.
After the Cascade tunnel was completed, the E-10's were assigned to Haskell Pass
and the Seattle- Leavenworth portions of the line.

HEADEND
In November 1904, six additional 65-foot RPO cars numbers 645-650 were delivered
by AC&F. They were essentially the same as the 1899 and 1902 lots.
In November 1904, ten 75' foot Baggage Mail & Express cars (BM&E) numbers
613-22 were delivered by AC&F. The wood sheathed cars had closed ends, 6 wheel
trucks, gas lights and lettered Great Northern with a square Great Northern Express
Company herald on the sides. At one end the cars had 30-foot RPO apartments. At
the other end, the baggage and express area contained a safe, desk letter case and
toilet facilities for a baggage messenger as well as fish racks for perishable shipments.
In April 1905, Barney & Smith built Great Northern's first Express Refrigerator cars
to transport fruit and other perishable cargos on its passenger trains. The eight 63-foot Express Refrigerator and Ventilator cars, numbers 681-687, were essentially
baggage cars with three ice bunkers, two at either end and the third between the
door. There were three hatches on the roof to service the bunkers. A further
description and photograph of these cars is found in Reference Sheet 165.
The remainder of the equipment was unchanged. A pool of 84 modern coaches
protected both the Flyer and the Expresses. The pool consisted of the 64 shorter 72
seat coaches, numbers 176-225, and 20 larger 86 seat coaches numbers 350-369.
A pool of 35 14 section Tourist cars, 805-812 converted in 1893, 813-827 built in
1898 for Eastern Ry of Minn and 829-837 built in 1902. The 24 seat 700 series
continued to be assigned along with the sixteen 14 section -1 drawing room Palace
Sleepers numbers 937-952. The Flyer continued to carry the 60' Buffet-Library cars,
numbers 751-758, instead of an observation. The cars offered first class passengers a
comfortable place to gather with wicker chairs, wrought iron trim, design woodwork,
colorful curtains and ornamental lamps.

Line Changes
The St. Paul - Seattle running time was slashed from 75 hours in 1893, to 60 hours in 1905 for the new Oriental Limited because of line improvements. The significant changes in the first twelve years, that allowed Great Northern to shave the running time by 15 hours included eliminating the hazardous switchbacks over Stevens Pass with the original 2.6 mile Cascade Tunnel in 1900. The tunnel eliminated eight and one half miles of track and reduced maximum elevation to 3,383 feet. Sixty-nine miles of mainline was relocated between Columbia Falls and Jennings, Montana in
1904, eliminating the 1.5% grades of the abandoned Haskell Pass line. Although the new line was 16 miles longer, the running time was slightly shorten. Trackage was improved in the western cities in several ways: the Everett tunnel was completed in 1901 eliminating the loop around the city over NP trackage; the line was changed through Spokane in 1902 for the new Havermale Island passenger depot; and the Seattle tunnel was completed in 1905, permitting the opening of King Street Station in 1906.