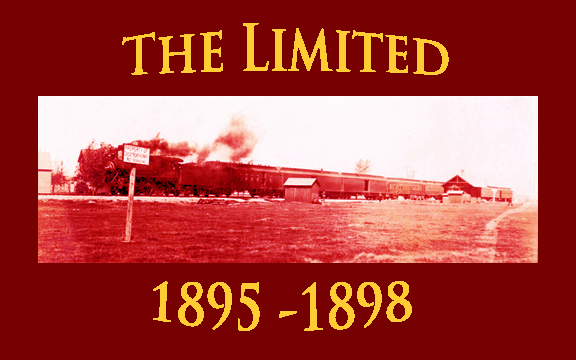 The On May 5, 1895, the Limited was the first name to be applied to Great Northern's St. Paul - Seattle train. GN called numbers three and four The Limited until January 1, 1899 when the name was changed to the Flyer. No significant changes were made to the 1827-mile transcontinental route during this period. Great Northern improved the service by speeding up the running time and adding service to Portland.Limited

Several years later, AFE 6216 dated 5/1/1902 was prepared for equipping sleepers 919, 921, 922, & 923 and Tourist cars 813, 814, & 815 with steam heating jackets, and other appliances because the stove heating in the cars was not satisfactory. The AFE continues that cars are now running on the O.R.&N. Ry., where all other cars are heated with steam. Since there were eights sets of equipment protecting three and four, this seems to imply that there was a pool of cars assigned to the Spokane - Portland route. Also, these cars were built in 1888 and had been bumped off mainline service by this time.

In 1896 GN changed its Seattle terminal by moving a short distance down Railroad Avenue to the Seattle, Lake Shore and Eastern Depot at the foot of Columbia St.
Schedule:

MOTIVE POWER
No changes were made in motive power assignments until May 1898, when the Eastern Railway of Minnesota took delivery of eight heavy E-10 Ten-wheelers, 1000-1007, having a tractive effort of 32,380 lbs. They were quickly sent to the Cascades for use as helpers.

THE CONSIST
Eight sets of equipment were still needed for the Limited's 69 hour schedule. Each set contained a Railway Post Office Car, Baggage/express car, Day Coach, Family Tourist Sleeper, Diner, Buffet-Library Car, and a Palace Sleeper. In 1895, GN still painted its passenger equipment maroon with gold lettering, and the roof, underbody and trucks were painted black. Soon GN Buffet Sleepers and coaches were assigned to the Spokane - Portland connection on the OR&N Co. At Havre, numbers 23 & 24 continue to offer 'through' Sleepers, Dining cars, Buffet Cars, and Day Coaches - between Havre, Great Falls, Butte.
HEADEND
Eight additional 63-foot baggage express cars were delivered by B&S in April 1896, numbers 360,364,336,341,377-380. They were almost identical to the earlier cars except may have been the first such cars built with enclosed ends. At one end the car had fish racks, at the other end, the baggage and express area contained a safe, desk letter case and toilet facilities for a baggage messenger.
In May 1898, B&S delivered ten 65-foot Baggage, Mail & Express (B.M.E.) cars with a 15-foot RPO apartment. The cars were numbered Montana Central 53-55 and GN 400-406. These cars were equipped with fish racks for the shipments of Northwest salmon and produce. In addition, these cars may have been the first to carry small shipments of silk which were starting to arrive with the new trade with the Orient. Tea from the Orient was not carried because its importation was restricted on the
West Coast to the port of San Francisco.
COACHES
Although no new coaches were ordered, all coaches assigned to the Limited received vestibules around 1898 to improve the transcontinental trains'.
TOURIST
450-457 series 14 section tourist cars were listed as Family Tourist Sleepers after July 1895.
DINING CAR
Eight of the 700 series 24 seat Dining Cars continued to be assigned to the Limited without any changes.
BUFFET-LIBRARY
The Limited continued to carry a 60-foot Buffet-Library Car numbers 751-758.

The train carried the same sleepers as assigned in 1893.

Although the ships rarely showed a profit, they did generate traffic for the fledgling line to the west coast, and provided a source of immigrant traffic that was diverted at Buffalo before reaching Chicago and the other western roads.
In 1895, Trains 13 and 14 ran on the new line connecting Duluth with the mainline at Grand Forks. The train carried Buffet Sleepers and Day Coaches. In 1898, the Eastern Railroad of Minnesota, a GN subsidiary, acquired 16 tourist sleeping cars for use with the marine passenger traffic generated at Duluth.

In the west, increasing traffic was being generated by the growing Puget Sound ports, especially Seattle. In August, 1896, Great Northern began offering service to the Orient when the Japanese NYK line began serving Seattle. In July 1897, the SS PORTLAND steamed into Seattle with three tons of gold. It was the first Yukon/Alaskan gold to reach the lower forty-eight and established Seattle in Alaskan commerce. Charles Wood's book The Great Northern Railway reports that in the late 1890's, at the time of the Alaska/Klondike goldrush, the trains 3 and 4 were nicknamed the Alaska Limited.

The average length of passenger trains crossing the Cascade summit was now eight cars weighing about 350 tons. Passenger Trains were allowed 75 minutes to make the twelve mile run, but on special occasions the trip could made in 45 minutes. Despite the sharp curves, heavy grades and frequent starts and stops, the ride was smooth enough to accommodate meal service in the dining car. Upon arrival at the switch backs, two consolidations would couple on to the train, one at the front and the other at the rear, facing backwards. Great Northern's passenger department proudly boasted of the care and safety with which operations were handled over the switchbacks telling the riding public:

"It will be noticed that most careful examination is made of every part of the train before the ascent is commenced. Every wheel and truck, all air brake mechanisms, signals, etc., are throughly inspected so as to guard against the possibility of an accident. This carefulness, which is a feature of the operation of the entire system, has resulted in the fact that there has never been an accident on the "switch-back" and passengers can be assured of the absolute safety and perfect security of the train at all times."