To me, Great Northern's Kettle Falls to Republic line was an ideal subject to model. It had a rich history of strife with the CPR, beautiful scenery and was a manageable size. Republic with a quaint depot, interesting small industries and 'terminal' trackage would make a nice switching site. Lately, I have heard reports that most of the railroad structures related are gone This was my first reference sheet and I sort of stumbled into it by the back door. In 1976, I was selected for a one month detail as Acting Port Director of Customs at Laurier, WA. In those days, when a vacancy occurred through, death, retirement or transfer, the District Office would solicit volunteers to fill in until a permanent replacement was chosen. Among the rank and file, the assignment was viewed as a way of getting rank incompetence out of town for a while or as a reward for superior achievement, depending on weather you were the selectee or not. 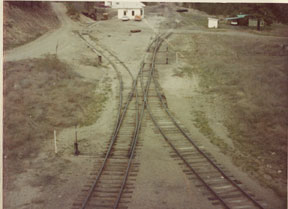 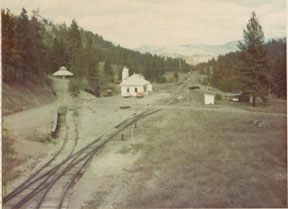 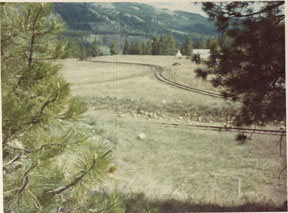 These two pictures were taken from the Highway 20 overpass, looking north. The righthand picture shows the wye on other side of (south) the Highway 20. The white objects in the middle ground mark the location a bulk oil dealer. In an earlier time several other industries were located on the wye tracks.This picture shows the beginnings of the wye, used to turn steam locomotives years ago. The center shot better shows the two earthen loading ramps on the team track running behind the station. Unfortunately the cheap camera I had at the time did not capture the hills in the distance or the large trestle just beyond the depot.

Like so many other rinky-dink ports of entry on the Canadian and Mexican borders, Laurier was created because of the railway. On my first day off, I took a drive to the end of the GN line at Republic. It proved to be a neat place and a perfect little town to model. I took several photos and measured the depot. During my ‘reward for superior achievement’ month I also visited Kettle Falls, Northport & Nelson, British Columbia. During my visits, I spoke with several old timers, many of whom went back to steam days. They advised me that in steam days most of the freight and mixed trains moved behind 4-8-0’s (G-3’s) and ‘light 2-8-0’s’ their term for the F-1 class. According to them the biggest source of traffic was ‘poles’, followed by cut lumber. Later I learned that the mines in adjacent British Columbia were the principle source of freight when the line was constructed. One interesting tidbit was the old timers claimed that at several locations such as Dulwich and Orient, the water tanks were a distance from the tracks. Since wood was so cheap, the GN bored logs to create pipes to bring the water to the track side stand pipes. They swore this was true, but I’m still not sure if this was not a yarn being laid on the city slicker.

The following year, 1977, the NMRA convention was held in Denver and the second annual Fraternal Order of Empire Builders meeting consisted of a dinner together during the convention. At that dinner, I met Charlie Martin, President of the newly formed FOEB, and mentioned Republic Depot, in passing. Charlie was very interested and later took my dimensions & photos to prepared the drawings which appeared in HO scale with the this reference sheet.